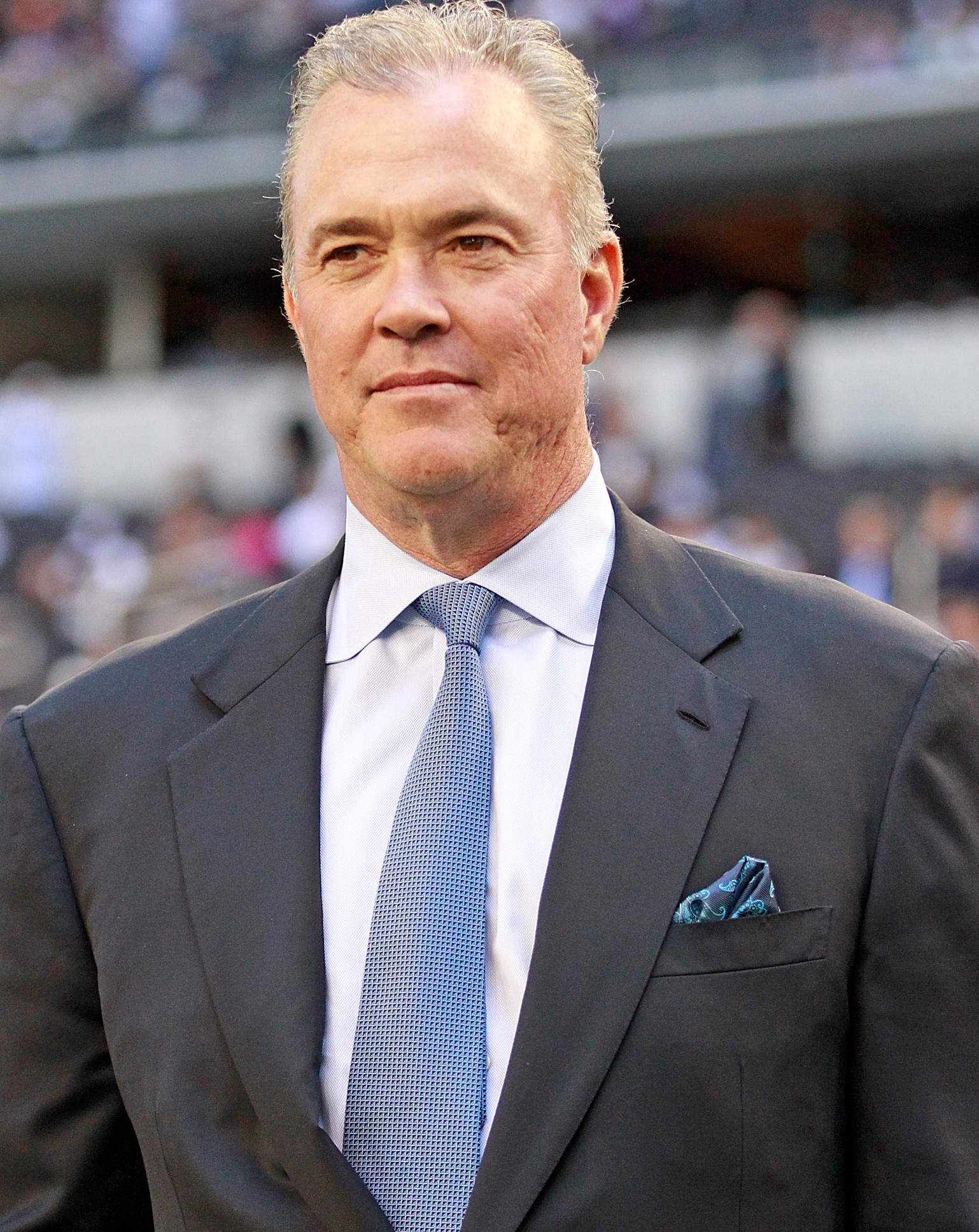 He oversees the management operations for all aspects of the Dallas Cowboys and AT&T Stadium, while also supervising the team’s scouting and player personnel department. His work involves managing the organization’s 400-plus employees, while also handling all of the club’s salary cap and all major player contract concerns. He also is active in the recruitment - and management - of all major events that come to AT&T Stadium and The Star in Frisco. Jones’ experience as a major college football player, and his years as one of the NFL’s top executives, were instrumental in his appointment to the League’s prestigious Competition Committee. His active involvement in stadium management, design and development has also landed him a spot on the NFL’s New Stadium Committee.

Following the Cowboys 12-4 regular season finish and 2014 NFC Eastern Division title, Stephen and Jerry Jones were named the co-recipients of the NFL Executive of the Year Award as presented by Sports Illustrated’s Monday Morning Quarterback.

Beginning in 1989, Jones has played an integral role in the team’s dramatic rise from a 1-15 record to being the NFL’s “Team of the Decade” with three Super Bowl titles in the 1990s. As he enters his 31st NFL season, Jones is a driving force behind the Cowboys push to return to the NFL’s elite level of teams. His recent work has seen the club restock its roster with some of the game’s top talent and the recent results have produced winning records in 10 of the last 16 seasons - and division titles in 2007, 2009, 2014, 2016 and 2018. During his tenure with the team Dallas, has established the club record for regular season wins (13) in 1992 and equaled that mark with 13 victories in 2007 and 2016.

Since 2010, Jones has crafted one of the more impressive drafting records in the NFL. In that 10-year period of time (2010-19) Dallas has selected 13 players who have become Pro Bowlers: Dez Bryant and Sean Lee (in 2010), Tyron Smith, DeMarco Murray and Dwayne Harris (2011), Travis Frederick (2013), Zack Martin and DeMarcus Lawrence (2014), Byron Jones (2015), Ezekiel Elliott, Jaylon Smith and Dak Prescott (2016) and Leighton Vander Esch (2018). That group has gone on to earn a combined total of 37 Pro Bowl selections, including ones made after departing Dallas. In those same 10 years, Dallas has selected 23 players who have become starters, with eight of those becoming All-Rookie Team selections. Additionally, since 1989, the Cowboys have sent 55 different players to the Pro Bowl, and of those, Dallas drafted 38.

The foundation for the future success of the team has been put in place on the offensive line where, following the 2018 season, Smith and Martin were Pro Bowlers together for the sixth straight year while Frederick (four straight) returned after missing the 2018 season due to illness to earn his fifth career trip. Prescott and Elliott - Dallas’ duo of young offensive backfield weapons - became the first pair of Cowboys rookies to ever be selected to the Pro Bowl in 2016. Prescott opened his career by becoming the first rookie quarterback in Cowboys’ history to be named to the Pro Bowl and the first to win AP Offensive Rookie of the Year, while Elliott won NFL rushing titles in two (2016 and 2018) of his first three years in the League.

Over the course of the last 18 years, Dallas draft classes have produced 55 players who have gone on to start for the Cowboys while 17 of those choices became All-Rookie Team selections. Since 2002 Dallas draft classes have produced 25 Pro Bowl players who collectively combined for 79 all-star game appearances - 18 more than any other team in the NFL (Kansas City, 61) - and 19 first-team All-Pro selections, the most in the league over that span.

In the ever-evolving strategy that dictates a team’s competitiveness in the current collective bargaining agreement, Jones’ performance in managing the Cowboys salary cap, and the club’s activity in free agency, has played a prominent role in the team’s ability to compete at the NFL’s highest level. Jones’ involvement in shaping the Dallas roster under the salary cap was critical in allowing the Cowboys to maintain one of the NFL’s most talented core group of players throughout the decade of the 1990s. His creativity and care taking of the Cowboys cap played a key role in the team’s six division titles, four conference championship game appearances and three world titles.

During a historic two-year period of time, Jones was involved in signing five Cowboys stars who were considered the best players in the game at their respective positions. Between September of 1993 and September of 1995, Jones helped orchestrate contract agreements with running back Emmitt Smith, quarterback Troy Aikman, fullback Daryl Johnston, wide receiver Michael Irvin and cornerback Deion Sanders.

Shortly after the turn of the century, Jones began spearheading the club’s new stadium efforts, overseeing every element of the development and construction of the venue while also working closely with local government, community and business leaders. He was directly responsible for the club’s successful referendum campaign in the fall of 2004 that saw the City of Arlington agree to join forces with the Cowboys in building a new state-of-the-art stadium - later to be named AT&T Stadium.

Opened to the public in May of 2009, the stadium’s dramatic first season of operation resulted in the venue being named the Sports Facility of the Year by the Sports Business Journal in May of 2010.

The 100,000-plus seat stadium established the attendance record for an NFL regular season game as 105,121 witnessed the September 20, 2009 home opener, while the 108,713 who attended the NBA All-Star Game on February 14, 2010 became the largest crowd to witness a game in the history of the sport.

With its architectural versatility and cutting edge media capabilities, AT&T Stadium has become a visible beacon that has established North Texas as a major focal point on the sports and entertainment canvas of North America.

The brilliant home of the Cowboys has become a powerful catalyst in attracting a wide range of national and international events that will define the future of the region for generations to come. The stadium has already played host to Super Bowl XLV (February of 2011), the NCAA Final Four in men’s basketball (April of 2014), the inaugural College Football Playoff Championship Game (January of 2015) and in 2018 became the first NFL stadium to host the NFL Draft. Other top flight sporting events for the future include, the annual Cotton Bowl classic, the Texas A&M-Arkansas football Southwest Classic and the annual AdvoCare Classic collegiate football series just to name a few.

In the summer of 2013, Jones was the organization’s point person in the negotiations that established the multi-year naming rights agreement for the Cowboys home in Arlington with AT&T.

AT&T Stadium remains the only venue in the world to host an NBA All-Star Game, a Super Bowl, the Men’s NCAA Final Four and the College Football Playoff Championship Game.

Shortly after the new name for AT&T Stadium was announced, Jones took on the responsibilities of spearheading a partnership with the City of Frisco (TX) and the Frisco Independent School District to develop a new home for the Cowboys World Headquarters and training facility in Frisco. The Star in Frisco opened its doors for operation in the summer of 2016. Located in a rapidly growing community of more than 150,000 residents, The Star is a partnership with the City of Frisco and Frisco ISD that places a strong focus on inspiring a strong future for high school football, youth sports and the next generation of players and fans by uniquely engaging them at the place where the Dallas Cowboys live, work and practice.

The Star is the only NFL training facility in the U.S. that is shared with a public high school athletic program. All 10 Frisco ISD high schools play home games within Ford Center at The Star, a state-of-the-art, 510,000-square-foot indoor athletic facility. With a capacity of 12,000 seats, Ford Center hosts a variety of events in addition to football games, such as concerts, collegiate basketball, boxing and professional lacrosse, to name a few.

Prior to focusing much of his energy on the innovative projects in Arlington and Frisco, Jones’ stewardship of historic Texas Stadium in Irving left behind a legacy of facility management that maximized the use and visibility of the venue into a year-round destination for sporting, entertainment, community and corporate events on an unprecedented level.
Speaking At
Land Grab: The Growing Real Estate Development
Close